Crashing Walls and Broken Politics in Rosi's Hands Over the City 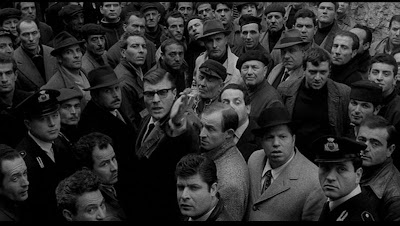 "You know what the true sin is? Losing."
Francisco Rosi's Hands Over the City compels the viewer to witness multiple layers of political compromise by creating a mosaic of inevitability. From the very first long shot of the converging city, we get the sense Naples is constructed of surface-level promises, hollow walls, and slick facades. Rosi wants to reveal what's hidden underneath, behind, or beyond the surface, the bottom line of possibility and progress. It's a film of great focus, almost too much so that we sometimes forget about the everyday man and woman hurt the most by the corruption. But Rosi constantly reminds how our surroundings can represent true intentions, both the morally corrupt and the honest, specifically the manmade and natural walls engulfing each dynamic moment in the film.
As Chris stated in his introduction, Rosi's "characters are important only to the extent they represent political positions and power", however each contains a professional/emotional duty complicating their role as a politician. Nottola and his scheming speculations show a self-righteous, arrogant businessman manipulating the political machine to make money. But his posturing about power and role as a councilman mask an infantile desire to build, to construct something large for the entire city to see and admire. De Vita is an engineer first and a leftist second, so his primary concerns are with the buildings themselves - the intricacies and fallacies of these structures and how they will affect they everyday working man. Finally, the Doctor, who not ironically is a centrist, gets torn, abused, and pushed from one side to the next, ultimately siding with his moral authority as a physician to fight Nottola. But each of these characters becomes defined not by their actions or reactions, but by the spaces Rosi creates for them. 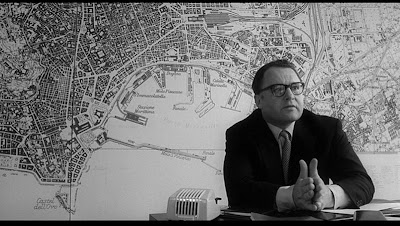 Hands Over the City uses walls and textures unlike any film I've seen, paralleling character to mise-en-scene to provide a window into how and why the film is so political. Rosi begins this motif during the opening sequence as he tracks the morning transgressions of a local neighborhood, highlighting a construction site and the pummeling sound of a pile-driver. As two men attempt to get breakfast, a gigantic piece of concrete falls into frame, leading to a series of collapses bringing down an entire building. For the everyday person, identity and hope become crushed by the fabricated walls built by their politicians. Nottola's office on the other hand is crisply wallpapered with an intricate map of the city, covering his walls with a sense of detail and preciseness high atop the city. Later, we see his likeness plastered on the walls outside, like an infection spreading undeterred. Also, every politician's house contains wall to wall paintings, a suffocating indication of wealth, as if these are the only witnesses to the shady dealings occurring before them. In the city council chamber, the walls are cold stone, simple, undeterred. Rosi still sees temporary hope in this space, where Democracy can blossom into something more than a springboard for greed. Later, Rosi uses archival footage during the election rally to show walls of people, angry, passionate, motivated, but hood-winked, a documentary element ripe for consideration. Finally, the outside space of the development project provides a disturbing finale to the film, where so much possibility should grow strong, but in truth more of the same politicking will fester, turning the ground into swiss cheese.
Of course, there are countless more spots in the film where space defines the message and mood of the film, and I'm eager to see if anyone has any thoughts on this motif. Also, Rosi's use of pans, tilts, and zooms could inspire an entirely different thought-process on the film, but one still linked to the issue of space.
Posted by GHJ - at 7:27 AM

I like your point about the walls as a running motif. I hadn't even thought of it. There, of course, are the structural walls which fall down in the tenement. If there's a metaphorical dimension to them, it's telling that the city experts don't know which walls are structural and which ones are superfluous. The walls inside the developer's office are disguised not to look like walls at all.

Chris - Absolutely, also, the lack of walls in certain places, like the development projects, where their future presence will represent more of the same political compromises.

This is a movie I have never seen, but your words really make me want to. I'll add it to my Netflix list pronto.

Yes - there is a very interesting play of walls, windows and doors - pictures, maps - representations of the city and views of the city - in the seen in Nottola's office. Let's see - a map, that turns out to be painted directly on the wall, and turns out to have an invisible door in the middle of it. The big photos on the other wall, views of the city that look like windows, but aren't - then later, we see Steiger looking out the real window at the city, with the reflection of the pictures in the glass... and of course the big model of his development in the corner, dominating the room.