Before the month ends and we move on to another film, I'd like to thank Chris for allowing me to choose this month's selection. Thanks also to Marshall for his comments and thoughts and to the few others who joined in. Although there wasn't a lot of discussion, I enjoyed what there was and I benefited from trying to articulate my thoughts on this film and on Hong in general. As many could probably tell, I'd like to write more on Hong in the future, in article or even book (especially if my Korean improves), and this experience was very useful in that regard. I hope others found the film and the discussion of some interest, or that perhaps they will track down this film or others by Hong in the future. I certainly think the films are worth the effort. And by all means, of course, I'd be happy to hear from late comers before the month is over or even in the coming months as replies to any of my Hong blog postings.

Also, in Hong news, he is currently in post-production on his latest film, which should be out later this year. Also, he has completed a short film which will premiere at the Jeonju film festival in Korea (April 30-May 8). It is part of a three film "Jeonju Digital Project" in which the festival invites three directors to make a digital short. Further details are available here (go to the JIFF news section and click on "Jeonju Digital Project 2009").

Two Shots That Intrigue(d)? Me

Just thought I'd mention a couple of shots that intrigue me, shots that are seemingly meaningless.

One is Munho going back and asking his wife to let him in at the beginning of the film: 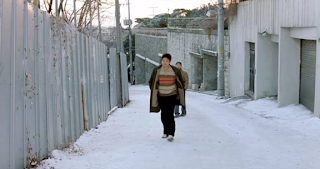 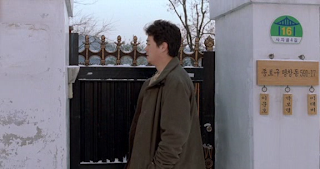 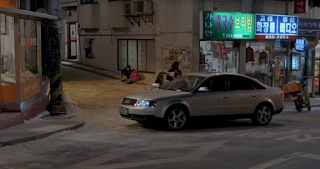 When re-examining the film, both of these moments seemed difficult to place. And perhaps, I thought, they are not meant to be. But, the more I thought and read, the more this seemed unlikely. In a film as pared down as this one (even by Hong's standards), it is highly unlikely that they don't serve some purpose. Then, with the mentioning of repetitions, I noted that both shots have their doubles.

The shots of Mun-ho are subtly replayed at the end of the film, when Mun-ho's male student Min-woo approaches Mun-ho and Kyung-hee in the hotel room: 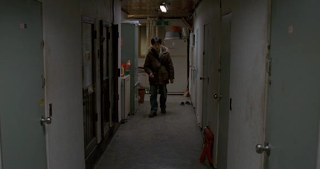 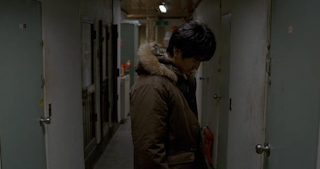 And the shot of Seon-hwa arriving can be seen as a mirror of the early scene in which the woman Mun-ho and Heon-jun gaze at before their flashbacks finally exits the scene in a car: 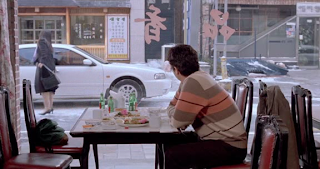 Now, we can see these as formal repetitions that work as a whole to offset the quotidian realism of the narrative. And/or we can start analyzing these for deeper meanings. Part of me wants to avoid the later, to remain intrigued by the shots instead of forcing an explanation. I remember watching Lynch's Mulholland Dr. and really enjoying it, but then not loving the film nearly as much (to the point of even being bored) once I had a certain framework in which to read and explain what was going on. And the other hand, one cannot and should not shut down these critical impulses. One can only hope that any given film is strong enough to resist their assault.
Posted by Marc Raymond at 6:55 AM 7 comments:

Labels: hong sang-soo, Woman is the Future of Man

Staying Wide: Some random and disjointed [my apologies] thoughts on Woman is the Future of Man

(This may sound like a joke, but I have given up "going online" for lent. So this post was written weeks ago, and has been scheduled to appear in the middle of the discussion (hopefully!) of Woman is the Future of Man. Therefore, I hope I am not either repeating things that have already been posted, or interrupting a tremendously interesting post-by-post dialogue of a certain theme (not that anything like that has ever happened). Regardless, accept my apologies for both posting blindly and randomly and for not being able to continue any discussion that may result from this posting or any others. I hope you will understand.) 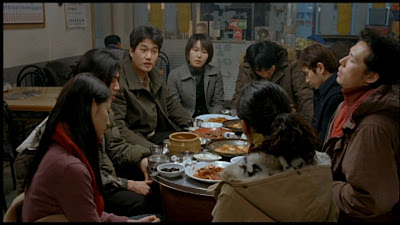 Thanks to Marc for getting me over my unconscious avoidance of New Korean Cinema. In fact, I have been actually avoiding, less unconsciously, Asian cinema as a whole for a while, I don't know why. Embarrassingly, I own only one Asian film! (In the Mood for love). One of the many great things about this club is getting a chance to see films that you might not have looked into.

I'd like to share with you a quick personal thing. I am a filmmaker. I want to grow as a filmmaker. It's all I want to do. But I dream also, in my old, more experienced age, of being able to teach filmmaking. I already keep a journal in which I only put thoughts, ideas, and tools that will help me to teach film one day.

Last year, I was so struck by a particular scene in Woody Allen's Cassandra's Dream ("struck" in a bad way) that I had to write about it in my "Teaching Journal" because I had never seen an example of a shot choice that was so blatantly wrong for the particular moment that was occurring. It was a full shot (or "wide shot". the differences are ambiguous, debatable and likely nonexistent) and it stayed a full shot for the entire tense filled, Plot-Point-Making scene, when it was screaming for individual character shots at certain key moments to emphasize certain necessary things. Now, even as I am writing this, it sounds like, just by saying a certain shot should be implemented, I am trying to turn something into convention. But what needs to be remembered is that certain moments ARE ALREADY conventional in their very foundation, and if the filmmaker should simply choose to cover it "unconventionally", it doesn't make it unconventional, it just makes it ineffective. 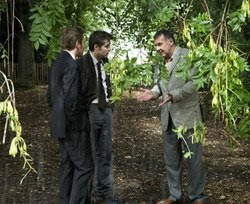 Being that I am still a student in many ways and not a teacher yet, I learned, from this moment in this film, that sometimes you can't just "stay wide". This, in a way, is part of a continued learning of film grammar.

It wasn't until I saw this film of the month, Woman is the Future of Man, that I realized in a more concrete way, why that scene in Cassandra's Dream didn't work.

We never get a close-up in this film, or even a medium shot. Hong "stays wide". Other directors who tend to keep a distance on their characters often use mise-en-scene to bring a character to isolation in the frame; no, not a close-up, but in a way an isolated character in a frame is a close-up without being close. Hong doesn't really do that. If a character happens to be the only one in the frame, it seems to just have happened that way. He is not creating that isolation as commentary, the camera is just "documenting" objectively. And it is this objectification, this avoidance of presenting any character in a relation-stimulating individual medium shot, that keeps us from fully identifying with anyone, thereby remaining able to stay away from judgement and/or sympathy. In this film of multiple voyages into pasts and the resulting confrontations in the present, it is tremendously effective. In that long, important scene in Cassandra's Dream, a very different film, it doesn't work.

Having seen WitFoM a second time, I remembered, with interest, my temporary frustration, on first viewing, at not being allowed to see the face of the waitress that they both try to "employ". I wasn't realizing yet her use in the film. I was merely holding tight to a conditioned expectation having been bombarded, in my traditional film-going life, with more conventional moments that a scene like that hints at, and knee-jerkingly expecting a certain view that other films have given me in that moment. (How many times does this happen that I am not conscious of?) 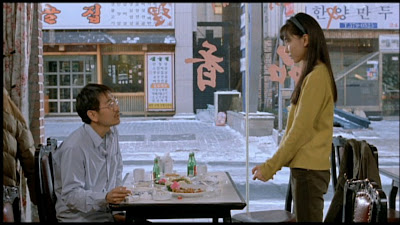 I was also so inspired and impressed with the subtlety of the performances and the presentations of these particular character's emotional states at any given time. How rare to witness a director so respectful of our patience and intelligence as an audience (to this degree!). Does his other work share this quality? I'd be interested to know. 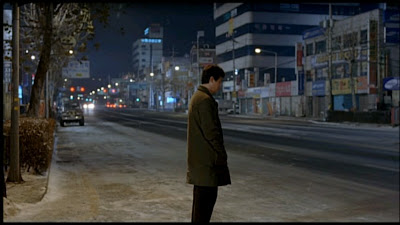 (Some random DVD grips: It's hard to be sad about New Yorker Video going out of business when I was so disappointed by a couple of [what some people might call small, but I consider] big deals. 1) As much as I respect Scorsese as a film historian, I don't want to be "forced" into either watching an introduction or hurriedly turning it off. Yes, I want to see that introduction. Follow Criterion's lead and place it as a separate option. 2) Why are the subtitles laying smack in the middle of the lower frame!!!!!?!?!?!?! How annoying. Once again, can't these designers look at stuff that works well and implement it?)
Posted by Peter Rinaldi at 12:51 AM 1 comment: