Pearls of Wisdom: The Death of Friendship in Thunderbolt and Lightfoot

The New Hollywood of the early 1970's merged their love for European Art House cinema with traditional home-grown genres (Western, Noir, Musical), challenging cinematic forms and expectations to establish new possibilities within narrative storytelling. Hopper, Penn, Rafelson, and Bogdanovich laid the foundation for Altman, Scorsese, Spielberg, and Lucas. But these filmmakers either descended into artistic obscurity or ascended to blinding mainstream stardom. Somewhere on the fringes of these polar opposites resided a few filmmakers keen on blurring even the most standard aesthetics, forcing the viewer into an uneasy and fascinating cinematic space. This is the realm of Michael Cimino.

On the surface, Michael Cimino's debut film Thunderbolt and Lightfoot (1974) appears to be a standard Clint Eastwood vehicle, co-starring Malpaso regulars George Kennedy and Geoffrey Lewis along with a young and spry Jeff Bridges as the titular Lightfoot. It's a heist film with comedic trimmings and road movie ruminations, all framed by a changing view of the West. However, looking at it in historical context, when American audiences were still reeling from the devastating social and political conflicts of the 1960's and early 1970's, Thunderbolt and Lightfoot presents an uncomfortable and complex clash of ideals between a naive, empowered youth and a disgruntled old-guard. Ironically, these altercations often take place in golden fields of wheat, or alongside rivers flanked by angular mountainsides, often framed by cloudy blue skies; or Anthony Mann country. Cimino and Eastwood see this power struggle as a key factor in certain harrowing situations, and it's no accident characters are left with the tragic results alone and uncertain. 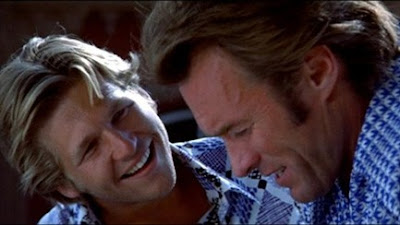 As far as debut films go, Thunderbolt and Lightfoot makes an astounding impression. The lyrical clash between classic Western genre traits and 20th century progress formulates a deceptive pattern of shifting tones, where comedy and tragedy are flip-sides of the same stubborn coin. Each character defines themselves based on this tension, ultimately complicating the traditional master/disciple relationship by revealing a deep sense of longing and regret. In the end, the pearls of wisdom sprinkled throughout the film take on an unsettling resonance when the very idea of friendship becomes smothered by greed and jealousy.
I'm eager to see what everyone else makes of this poetic and haunting film.
Posted by GHJ - at 12:18 PM

A great choice; I'm looking forward to getting to write a bit more extensively on this film, one of the Ciminos I've probably considered least.

I love this film. No one ever filmed a car whizzing down an empty, open road quite like Cimino. He made it look epic. Plus he always had great taste in casting when it came to actresses. As a director he puts Bogdanavich, Friedkin, Spielberg and Lucas to shame. The death of his career is one of the great tragedies of modern American film. Why he out of all of the 70s filmmakers was used of the sacrificial lamb is something I am fascinated by. I read final cut, and I don't think that book really answers this question.

Have you seen The Sunchaser? There's a film that makes cars look fifty feet wide, as if they're capable of tearing through anything.

Good points Ignatiy and Anonymous, I agree, Final Cut only gets at the surface of the Cimino situation. However, Cimino's demise certainly wasn't a clear cut witch hunt either. As for those long shots of cars, I think it's the relationship with the characters in them that makes these moments so devastating and fascinating.