It used to be that if someone asked me to name the ultimate 'car film', Three Lane Blacktop would pop into my mind first. But not anymore.

There is not nearly the same level of car fetishism in Thunderbolt and Lightfoot, but Cimino is definitely trying to say something with autos. The title characters are in seven different automobiles before credits roll, four of them they stole. And even though they are always moving, they don't seem like they get anywhere.

Even a plan is worked out by drawing on a car. 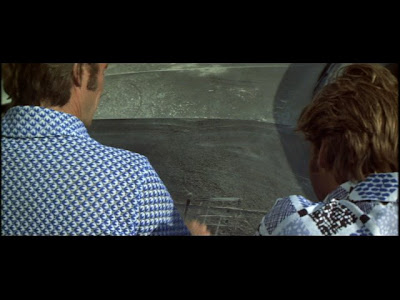 Parallels to the Western genre are no clearer then when the cars are "taken to water". 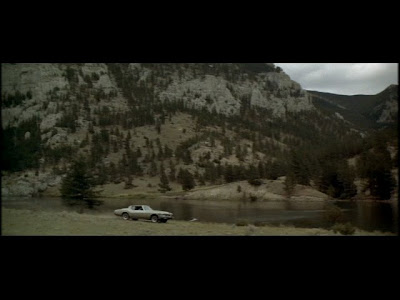 There are so many scenes where the cars are not on any road at all. It is really strange and yet, because of the scenery, oddly beautiful and familiar. Replace the car for a horse and we have a period-piece. 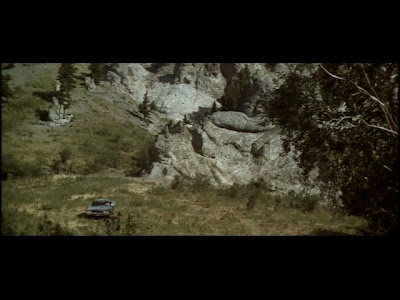 It feels like, in the hands of another, less sincere director, the off-road abundance would approach tacky; the connections with the Western would be heavy-handed. Instead it comes off subtle and grounded in a reality that masks it. It wasn't even affecting me on the first viewing. 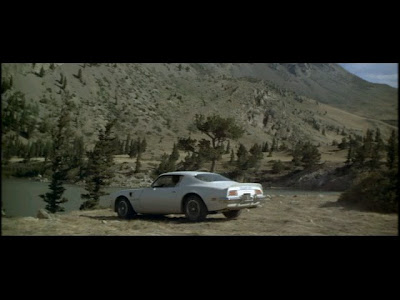 Jeff Bridges brought such an energy to this performance, a playfulness and spirit that worked so well with the material. When an actor makes choices that so totally create an understanding in the viewer that the words are spilling right from the character's mind, it's magic.

The sorrow and pain that Lightfoot has is only revealed cryptically, and contrapuntally to Thunderbolt. Like in the scene where Lightfoot talks about how he started on the road, after meeting a woman on a train. "Now you can't stop" Thunderbolt interjects. Lightfoot looks at him. It's a full shot, but we can still see, through Bridges' look, not just an acknowledgment of that truth, but a sadness in it as well. 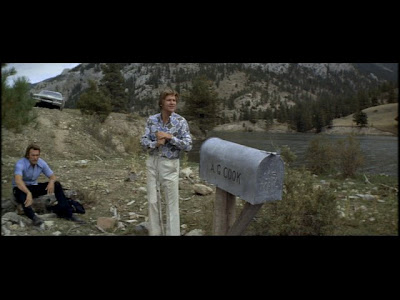 Maybe someone can help me understand the significance of Thunderbolt having the white convertible Cadillac in the end, which Lightfoot revealed is his goal in the beginning of the film. Did Cimino simply want him to die a "hero" in his dream car?

Once again, the FotMC is blessed with another interesting and rewarding selection that fell under my radar all these years. Looking forward to other discussions. Thanks Glenn.
Posted by Peter Rinaldi at 10:42 PM

Peter - great observations! Sincerity is a great way to describe Cimino's approach to Western themes, which take on a very personal meaning. As for the ending, I think Cimino wanted to show us a deep sadness in Thunderbolt's character. They finally attain the White Cadillac (i.e. freedom), but it means very little without the presence of Lightfoot. It's not the car that matters, but the friendship linked by memories of the car. Nostalgia and melancholy are inseparable.

Interesting.
but don't you think there is something a little odd (intentionally) about the last scene? Thunderbolt picks up Lightfoot, and the exchange, before he gets in the car, threw me off both times i watched it. I realized they were just "joking around", kind of acting like they didn't know each other or something. But it was just a little too odd to be just off-key, almost like something is trying to be conveyed. Am i just reading into it too much?

I don't think you're reading too much into it, but I didn't get the odd sensibility you did. I felt a deep sadness in the last sequence that makes the ending strange and compassionate.

Sounds awesome. I've never seen the picture, but I do dig "car films".

My favorite probably being Vanishing Point, but I also have a really soft spot for a picture that's a little bit different, The Car.

It's taken me all month to watch it, but yep - worth the wait... very nice film. I noticed (since I was looking for it) just how often they take the cars to water - it's where most of the "chapter" shifts in the film occur... including the end, if I'm not mistaken - they're crossing a bridge when what happens happens...

It has an interesting elliptical pacing - which I think gives it some of that melancholy tone - pausing on the scenery, those shots by the rivers, jumping from the middle of a conversation to another scene, but taking a while to put the scene in perspective - there are quite a few scenes where it takes a minute or two to get your bearings... though the film lets you reorient yourself - lets you live with scenes a bit, both to let you stay with the characters a bit, and to figure out where the story is going. Nice effect.

interesting. you're making me want to throw it on again. that pacing, i think, is something that Cimino cultivated into a distinct style.

Warfreak,
yeah, I think there are some people that would say Crash is the ultimate car fetish film.