A note on the "character" of Mabuse. 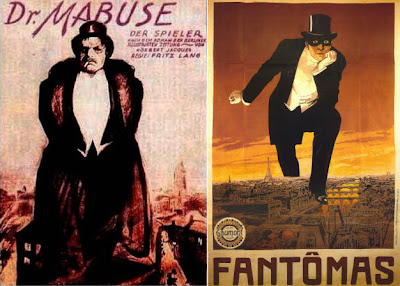 Who is Dr. Mabuse? This is a difficult question. Mabuse is the Great Unknown. It's impossible to define his character on its own. Mabuse always needs an opposition. His defining characteristic is his role as an antagonist; he only exists when there is someone trying to find him or defeat (which is distinct from thwart) him. Mabuse is just a name for a certain evil; he's a folk tale. So, in order to be able to write anything longer than a sentence about the character of Mabuse (not really a character at all--a something rather than a someone), we always need a comparison. Mabuse is always "this and not that," but never a particular characteristic that stands on its own--the only things we have with any certainty are his name and his villainy.

Fantômas, on the other hand, is always there; he escapes as often as Mabuse seemingly dies, and his actions stir society to find a solution (for this reason, perhaps, Juve and and Fandor are generic--they could be any policeman or any journalist, and are therefore closer to Mabuse in conception that Fantômas; it's maybe for this reason that they serve as Fantômas's antagonists in every film, whereas every Mabuse movie needs new heroes). There are a thousand Mabuses, but only one Fantômas.

So: Mabuse and Fantômas. Both originated in popular novels and then found their way into silent serials, returned in the early sound era and then in the 1960s. Lang started a small Mabuse craze with his last film, The Thousand Eyes of Dr. Mabuse, and it continued through the decade with a series of spin-offs, the best of which were directed by the krimi expert Harald Reinl. Fantômas had been in a few films in the early 1930s and late 1940s (his absence during the Occupation is conspicuous), but he returned in full force in the 1960s in a trio of brightly-colored capers starring Jean Marais. Both characters are popularly associated with the major directors (Feuillade and Lang) who originated them, and both have been reinterpreted by later, equally distinctive filmmakers (Pál Fejös's Fantômas talkie, Claude Chabrol's 1990 remake of Dr. Mabuse the Gambler, Dr. M). Historically, they're no so different. But history's just a footnote. Fantômas is vindictive while Mabuse is vengeful. The specificity of Fantômas means that his presence has weight (there's always a surprise when we discover that someone is really Fantômas in disguise), while Mabuse's shifting identity and clairvoyance means that his presence is always assumed. While Fantômas is a villain, Mabuse is an evil.
Posted by Ignatiy Vishnevetsky at 7:59 AM

This is another set of films I have to watch - one of the fascinating things about the first Mabuse film is how it is posed between the 1910s crime series films and later models - drawing on the older films, and pushing them in other directions... I've seen a few of the older films, but I've been itching to see some more...

Yes--it is a sort of transition, Lang's interests representing the future of the crime film and the source novel, which was heavily influenced by the Fantômas and Fu Manchu books, being a link to early 20th century pulp.