What follows are some random thoughts on Bad Influence. Stress on "random".

We are given little in the way of motive for what Alex does. We know he was sinister, in some way, before meeting Michael, that's about all. Alex keeps repeating that Michael "asked for this". Just as he forms Michael into the "take no shit" man his corporate success demands, Alex alludes to a certain hatred for this game, and perhaps punishes Michael for his weakness in even playing it. Like an evil version of The Secret, Alex tells Michael to "make it happen", then terrorizes to make it so, "covering his bases" all the while. 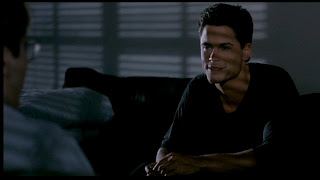 Michael is still hesitant to tell him. He stumbles.
Then, moving away from the shadow, Alex says "Just for fun, come on, tell me, what are you afraid of?" 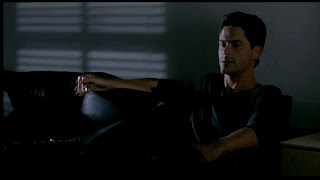 This frees Michael from his hesitation. "I'm afraid of getting married, I guess." They discuss it. "Done." says Alex.
Alex then moves back into the shadow. It is a closer shot. The shadow seems more prominent. 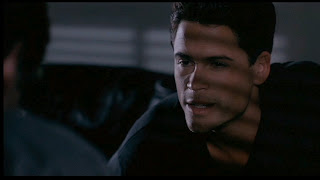 "Now tell me what you want more than anything else in the world."
Michael isn't hesitant anymore. Alex is in. He can present his dark side and get a response. Michael reveals that he wants the senior analyst position.
"Drink to it. Make it happen", commands Alex. They toast.
"Make it happen" repeats Michael. Alex smiles.

Alex can be viewed as a manifestation of "passive excess". Passive, in that Michael has no attachment to his 'stuff'. This 'stuff' representing the byproduct of corporate greed. Alex uses this stuff to wreak havoc in Michael's world. 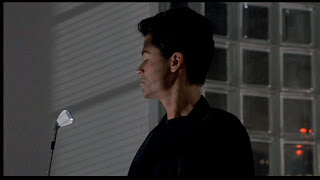 Alex scans Michael's 'stuff'. "Very nice." he says low. Spots the golf clubs. He laughs to himself. "Do you play?", he asks.
"No. Never" answers Michael.
He doesn't play golf. Why does he have the clubs? Just because it's what he thinks he should have?

When Alex takes his stuff away, Michael wants it back, only because "it's mine", but just as easily tells Alex to "keep it". "So the stuff makes us even?" "Yeah", answers Michael, "the stuff makes us even." This forces Alex to take it to the next level. He has to take away other 'stuff'. With the unused golf club, a symbol of corporate recreation and excess (and Michael's passive excess), Alex kills Claire.

"Why did you get this?" asks Michael's brother as he stares into the video camera.
"I don't know, it was on sale".
"Do you need it?"
"That's not the point"
What does Micheal mean? What IS the point. Is it that Michael feels he has to have it, that this is what people like him have in their lives? Even though he can't produce a reason why he has it. 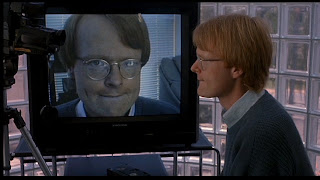 Pismo senses the trouble with it.
"You better give it away. Cut your losses", he says.
"You're not making any sense."

Alex uses this camera to 'help' remove that which Michael is afraid of... 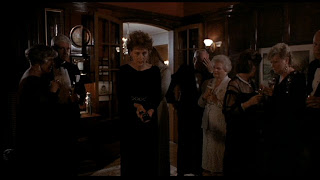 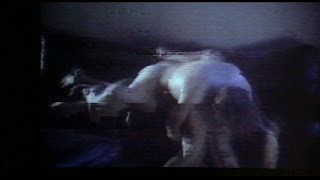 ...then terrorizes him with it. 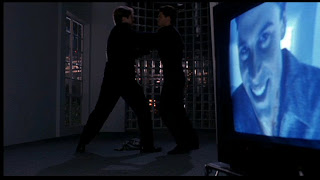 Finally, Michael turns it on Alex. 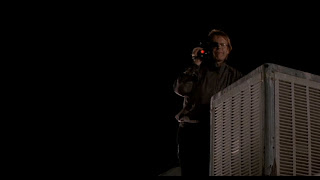 I find this shot, one of the last, to be very interesting. Michael staring into the mysterious waters that Alex's body never rose from. He is basically staring into the mystery that is (was) Alex. "The cops won't believe this guy even exists" was Pismo's worry. The camera, the only thing that will save him now, sits next to Michael. 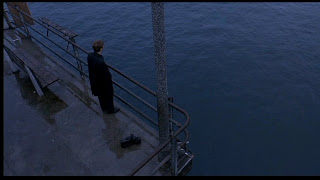 Posted by Peter Rinaldi at 3:01 AM

Peter - The Video Camera is definitely one of the most interesting aspects of Bad Influence. It's fascinating how Hanson refuses to reveal the complete reality with which the camera captures in favor of a more fragmented recreation, i.e. the sex tape, the murder offscreen, the Patterson confrontation. We're forced to deal directly with the end results, much in the same shocking manner as Michael. These moments also reveal the limitations of understanding offscreen space. What exactly happened during these scenes becomes a moot point, and the atmosphere of power and submission overwhelms.

Just to take this a step further, to me the most bewildering series of scenes are the robberies. First of all, we can't tell if he is terrified or if he is enjoying it because he has that rabbit head on. This is such an interesting manipulation of the audience. I, myself was anxious to see an indication that he is surprised when Alex holds up the guy with the gun. But it isn't revealed.

Then when the rabbit head is off, we see he is drunk, so that's an excuse for him conspiring with Alex and actually wanting to raise more hell. Or is it? We really don't know till the next day when he says that the last thing he remembers is driving around Patterson's house. So he was okay with the robberies but angry with Alex for the Patterson incident? Why? Because that was the incident that happened mysteriously offscreen(in his blackout)? Maybe you have some theory on the screenwriter's and/or filmmaker's intentions here.

I think our questions about offscreen space comes down to this; Michael is upset about Patterson more than the robberies because he's worried about being found out at work (the key to his lifestyle), which Alex understands and ultimately is why he lies about Michael's involvement in the Patterson incident. Because of the mask, Michael can't be linked to the robberies, and these crimes represent Michael's complete separation and disrespect for anything outside the yuppie world. He simply doesn't care about the ramifications because they exist outside of his own selfishness. The Patterson incident becomes a perfect bridge from Alex's world to Michael's. Maybe Hanson doesn't show it because "not knowing for certain" is the one thing Alex knows will control Michael unequivocally, and in turn the viewer. We get progressively more sucked into Michael's uncertainty and fear later with the murder of Claire. Didn't Polanski say something along the lines that if you don't showing something, you make it that much more frightening?