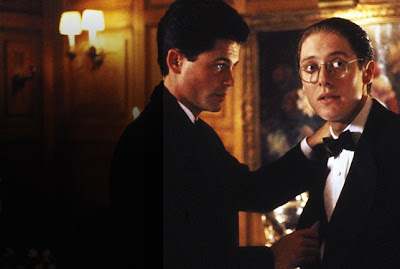 Neo-noirs, the modern day cinematic evolution of the classic Film Noir, mix old and new aesthetics to deconstruct, challenge, and ultimately re-define their genre fore-fathers. Films such as Body Heat, Gloria, and Blue Steel just to name a few, seamlessly flip preconceived genre notions via archetype reversals and plot twists. But the layers of these films aren't merely skin deep. By inserting subversive modern day critiques (social, technological, political) into narratives obsessed with sexual deviancy, fatalism, and greed, neo-noirs intentionally provoke strong and provocative reactions from the viewer. To me, Curtis Hanson's seedy and brutal Bad Influence brilliantly evokes these themes and will hopefully open up a plethora of inroads for discussion during the month ahead.
Here are a few possible starters. There are two separate realities battling for supremacy throughout Bad Influence; first, the corporate void of corrupt ideals, greed, and lethargy which is Michael's (James Spader) reality, and second, the dark underbelly of sexual manipulation, violence, and crime defined by Alex (Rob Lowe). How do these separate levels of existence compliment, contrast, or overlap each other? To what extend does Hanson construct these spaces through juxtapositions of Noir visuals and music? And lastly, how does the key motif of power vs. submission become an off screen element in ways contrary to mainstream Hollywood fare (and later Hanson films as well)?
Bad Influence has plenty of dirty little secrets to tell, bits of sleazy wisdom that describe an American obsession with power and the inevitable futility of trying to control one's fate. Let the mind games begin!
Posted by GHJ - at 10:15 AM

Thanks for the introduction; I'm excited to see this! I've never been too up on the whole neo-noir tendency, so it's great to have to watch one and write about it.

And thanks to everyone who contributed to last month's discussion--posters, commentors and readers.

I must say I'm strangely excited about this selection...