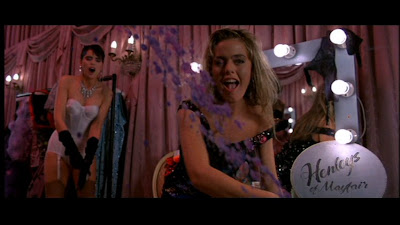 I'm Peter Rinaldi. I'm a filmmaker from New York. First time posting here. I also contribute various material to The Boutros Boutros Follies, including a film column called SIN-E-FILE, named after Godard's claim that he "has the sin of the cinephile". Nice to have this place to hang with fellow sinners.

This film selection is what FOTMC is all about. It is possible, though unlikely, that I would have eventually come across Absolute Beginners. But, without Mr. Vishnevetsky’s introduction, and the very nature of this “club”, I doubt I would’ve looked at it with the attention it deserves. I am a big Beatles fan and I walked away from a forced viewing of Julie Taymor’s Across The Universe with a sincere appreciation of Ms. Taymor as an artist. I feel like that experience prepared me and opened my mind wide enough to take in Absolute Beginners.

Watching it, I was reminded of Taymor’s film, along with One from the Heart and, and oddly enough, Do the Right Thing (Despite the race issues, which might make an interesting comparison, I’m speaking purely visually). And, as the camera kept moving, I couldn’t help but think perhaps Temple screened some Orson Welles and Max Ophuls in preparation for this ambitious undertaking. Some came before and some came after this 1986 film, but I think it is a stretch to think Temple was significantly influenced by, nor an influence of, any of these. [It can get silly to talk too much about influences. Take a look at this first line of an IMDB review. Maybe someone can tell me if this is joke: “Julien Temple's "Absolute Beginners" is probably more well known for it's breathtaking and legendary opening tracking shot through a gloriously campy backlot version of London's SoHo District (so influential it even served as an in-joke in Robert Altman's ‘The Player’)”]

Maybe we can discuss this, but I don't think Absolute Beginners is a great film. It doesn't have a depth that even approaches great work. But what is really fascinating for me is just how far it is from being a bad film, or even a mediocre film. This is where I am reminded of Across the Universe. A bad film is not one that fails. (What does "failure" even mean in art?) A bad film is one that is created without purpose, clear intent, without a singular vision. Temple has a vision with this film (like Taymor had with her film). It might be derivative. It might be corny, or even slightly embarrassing sometimes. But every shot seems to be done with a confidence and a force that is expressive and exciting. That can’t be said of even some great films. That alone might not make a film great, but it does make you keep watching with respect and appreciation. And all of the performances are on the same tonal page. Not an easy task with this kind of stylized work. This is the sign of a good director. The audience is never insulted. And if your mind is open enough, it is an enjoyable, even cinematically rewarding, time.
Thanks, Ignatiy, for this selection. I am excited to see what others have to say about it.

One of the reasons I'm attracted to films like Absolute Beginners is that there is much more fertile ground in writing about why a film is the way it is than writing about why it's "good" (or how it could be "good"). Here's a movie that isn't always successful at what it's trying to do, and because of that, a lot of interesting issues about cinema come to the forefront in a way that never would in a film that works within its limits.

That's interesting because I think where it doesn't work is where it is working within its limits, particularly as a musical. By that I mean it tries hard, it seems, to fit into the musical tradition.

On a side note:

It's interesting to remember that this is 1986. The musical is in the middle of its long death run.

[Maybe someone has another take on this, but, the way I see it Cabaret killed the traditional musical. Annie, nor Fame, nor Newsies could bring it back to life. Not until Chicago did an audience believe they could start to swallow anything other than a candlestick breaking into song]

I only bring this up to illustrate this was a large mountain Temple has to climb trying to make "break out in song" musical in the mid-eighties. In one way, I commend the confidence in his staging and execution, in another way (and there are touches of this, but) I think the film could've benefited from an approach a bit more outside the tradition.

No, it's not a great film but I'm old enough to remember all the US hype about AbBeg and thinking that no one could deliver on these ad campaign promises. A friend of mine who knew musicals weren't a favorite genre for me strongly reccomended it. I'm glad he did. Temple's hectic reverse dystopia has some great songs and pastiche of all manner of musical films.
If you ask me, the Player reference is no joke in such a twisty self referential film. Temple does seem wild about tracking shots and uses them in music videos as well.

FWIW - I, too, was visually reminded of Do The Right Thing, long before the thematic affinities really came clear.