July's Film of the Month 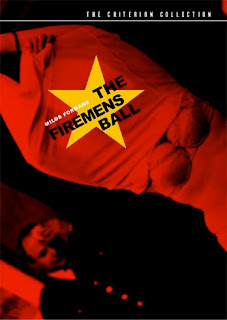 Hello, FOTM club members and interested readers. Marilyn from Ferdy on Films, etc. here. The club has been a bit sparse for participation this summer—yes, we’d all rather be enjoying the summer (at outdoor film venues, perhaps?)—but the club meetings march on. Chris has asked me to pick the film for this later-than-usual start for the film of the month. I’ve chosen a film I haven’t seen but that will help with the survey I’m currently doing of the works of Milos Forman, namely, The Firemen’s Ball. My interest stems from a retro Facets Multimedia had of Forman’s Czech films and my own continuing interest in films from the Balkan/Soviet Bloc region. I’m not well versed in films of the Czech New Wave, so I hope to broaden my knowledge of this movement. I hope club members with knowledge in this area will step up with what they know. For a good overview of the Czech New Wave, read Andrew James Horton’s primer at GreenCine.

Because we’re getting a late start, I’m going to post on the film by July 13. As always, feel free to post before I do.
The Firemen’s Ball is available for rent or purchase (Criterion Collection) on Region-1 DVD through all the usual sources.
Posted by Marilyn at 9:25 AM

Labels: July Film of the Month

I'll admit to being one of the slackers (partly because I couldn't get the last film), but I'm excited about this one. Good choice Marilyn.

I haven't seen any of Forman's pre-American films, though I've been meaning to for a while. This is a good excuse, looking forward to checking out the film and joining the discussion.

This is another good choice - Czech new wave is an area I know very little about, and this will be a good chance to dive in.

And it is too bad the DeMille film was so hard to find - I waited quite a while to get it from Netflix, but when I did, it was worth it. It's a film I probably wouldn't have sought out otherwise, so I am very glad it came up here. And I found a copy of the Higashi book that's been mentioned here to boot! So even if I haven't had much to say about it, it was a very inspiring choice...

Terrific choice- a film I have seen, but which is ripe for a revisitation, as it's been years.

Thanks, everyone. Brian, I'm glad you've seen it some time ago. I'm sure you'll have some nuanced observations that we first-timers won't catch.

It's great to see cinema taken seriously, this is an excellent endeavor!

We've recently started a club that is dedicated to the same. It's called the Culturazzi Club . The club strives strives to bring people in arts, cinema, literature, music and theater across the world together on a common platform, where they can share their thoughts, opinions, and interact with each other.
We regularly post reviews revolving around the same at the Culturazzi Club Review Section . We would love to have you all participate in discussions and give us useful feedback.
Hope you all enjoy!
Regards,
Culturazzi

Wonderful film, and great one for discussion.

Btw, just a nitpick, but the primer is on GreenCine.com proper; the Daily is our wonderful blog and of course David Hudson edited the primer, but we have it on our main site (and, cheap plug alert, available for rent).

Anyway, again, great choice. One of my favorite Forman films.