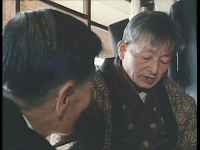 In the beginning, there was the camera. I'm no historian, but I'm easily swayed by the argument that social protest as we now know it did not exist before the invention of photography. It provided a reliable recording device that could prove to observers across space and time that, indeed, the authority of the powerful was being challenged. Would peace marches exist without cameras to record them? Would flag-burnings? Would Kenzo Okuzaki?

In the Emperor's Naked Army Marches On Okuzaki tracks down the surviving members of Japanese Army squadrons that were stationed in New Guinea, confronting them to tell the stories of their involvement in unspeakable acts in the days following the news of their country's surrender to General Douglas MacArthur. John Farr calls him a "one-man truth-and-reconciliation committee", which might sound overly-glib but opens an interesting line of inquiry. South Africa's TRC was designed to bring the truth of the apartheid regime into the light. Some felt the commission placed too high a value on truth at the expense of justice. Okuzaki also is committed to pursuit of truth, facts, and information. When he uses brute force on his interviewees, it's not so much a method of justice or punishment, but coercion so that they'll do what he wants them to do: spill the beans.

But I don't think Okuzaki is uninterested in justice either; he talks of a kind of karmic retribution for post-wartime crimes in the form of physical ailments. He's unabashed in claiming his moral superiority over those he confronts. And the camera too performs a role in meting justice or punishment. It's often alluded to that family honor is the obstacle to honest confessions by the former soldiers. Okuzaki appeals to a higher set of ideals, arguing that the revelation of truth about murder and cannibalism will comfort the victims' souls, and that this is a greater goal than maintaining the integrity of family honor. But it seems likely that he also feels that getting his interviewees' testimonies on film is its own form of justice. I'd be curious to see a follow-up on how the successful release of the Emperor's Naked Army Marches On in 1987 affected the lives of the former soldiers in the film, and their families.

Hi there, Brian. Something I discovered about what happened after the film was made:

In 1987, Okuszaki was sentenced to 12 years hard labour for attempted manslaughter. He appealed, and his lawyer tried to introduce the completed film as evidence. The judge admitted it, and Hara quickly produced a video transfer of the film. It was shown in court. It was also the first time Okuzaki saw the film. The screening didn't help; the higher court upheld the ruling.

Oh, that's really interesting, girish. Although attempted manslaughter sounds like a paradox. I wonder why that was his sentence...

Regarding social protest before photography: i too would have thought it didn't exist before the photo image, but my film teacher is doing a film on engraving and it's use as a tool of war protest throughout history. it is very eye opening. just thought you may find that interesting.

"Although attempted manslaughter sounds like a paradox. I wonder why that was his sentence..."

Perhaps because Okuzaki didn't actually succeed in killing Koshimizu's son; his attempt was a failed one.

Girish, I guess I'm alluding to my childhood understanding of the word "manslaughter"- accidental killing, as opposed to "murder" which requires intent. I now know that the terminology's usage is more complicated than that, but since I'm not clear on the specifics, I still tend to translate "attempted manslaughter" as "attempted accidental killing," which is definitely a paradox.

Of course, my above reflection is written as if in ignorance of Okuzaki's shooting incident, as described at the end of the film. I'll chalk it up to my tendency to write in "spoiler mode". I suppose I would go on to say that the shooting doesn't come out of the blue even if it has nothing to do with truth or reconciliation. Though Okuzaki talks of wanting to set the record straight above all other goals, he's pointed toward punishment, by camera or by other means, all along. Ignatiy Vishnevetsky's post above gets at this very eloquently.

Peter, thanks for your comment. I'd like to see that film! When I think of engraving as war protest I think of Paul Revere's engraving of the Boston Massacre, and that's about as far as it goes. I wonder what the differences in the manner of protest pre-photography and post-photography (as well as pre-motion picture and post-motion picture) might be. Are there fewer than one would expect?

On punishment: I think Okuzaki is definitely looking for punishment - he talks about it often enough. I'm inclined to think that survivor's guilt is a significant part of his motivation - he wants to mete out punishment on those who have done wrong - but it's hard to avoid the idea that he also wants to suffer punishment himself. He courts trouble - when he does something violent or illegal he quickly volunteers to take responsibility - he even wants to build a jail cell in his own home....

I should probably add - there were plenty of demonstrations and what not before the invention of photography - what might be missing is a certain type of symbolic demonstration... maybe the possibility of a non-violent demonstration.... Though I'm not sure - quite a few protests were purely symbolic - presentations of grievances and so on....